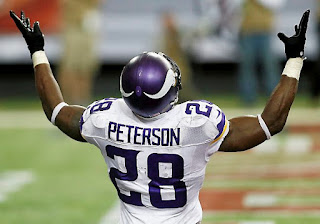 For 10 years in the North Star State, Adrian Peterson was the star man, leading the Minnesota Vikings' rushing attack. Setting franchise records for both yardage and touchdowns, the 7th overall pick from the 2007 draft even came within 9 yards of beating Eric Dickerson's single-season rushing record back in 2012, just a year after returning from an ACL injury in record time.


Feats like those made jerseys bearing Peterson's name and number a hot commodity in Minnesota and around the football world. And that number was of course 28. It was a number Peterson wore at Palestine High School in his native Texas and for all three of his seasons playing at the University of Oklahoma. So when he was drafted by the Vikings, he naturally gravitated towards the vacant number 28 to begin his professional career.

So associated with the number 28 was Peterson that when former Oakland Raiders running back Latavius Murray was signed by the Vikings in free agency in 2017, he declined to adopt Peterson's former number out of respect for the former Viking's career, despite having worn 28 himself for all four of his seasons in northern California.

But back in 2012, Peterson courted controversy when he publicly decried the potential cost of changing his number to 23 – a cool million dollars. The reason behind his desire for different digits never became clear at the time, but considering the names that have worn that integer upon their backs in recent years - including NBA stars Michael Jordan and LeBron James, and soccer phenom David Beckham - it's not hard to see the appeal.

When Peterson joined the New Orleans Saints after being cut by the Vikings in 2017, he had the opportunity to switch to the number 23 then. The incumbent, Marcus Murphy, was the team's return specialist and probably would have given it up for a nominal price, but instead Peterson opted to stick with the number 28 vacated by B. W. Webb, allowing rookie corner Marshon Lattimore to pick up 23.

Unfortunately for Peterson, his time in Louisiana was short and a trade to the Arizona Cardinals was completed on Tuesday morning. This time, however, the number 28 was occupied by a defensive starter, Justin Bethel, but wouldn't you know it? The number 23 was free! Peterson's arrival meant someone had to give way to make room on the roster, and that someone was incumbent number 23 Chris Johnson. Sure, why not rub salt in the wound and give the guy's old jersey to his immediate replacement?

So, five years on from his initial attempt to claim the number, Peterson finally gets to wear 23 on his back. However, it'll take quite the performance from him in the remaining 12 weeks of the season to restore his reputation as a star of similar magnitude to 23s of old in Beckham, James and Jordan.
Posted by Tom at 23:35